I walked the premises after hours in the evening, enjoying the trees and nature.
I imagined it in 1836, crowded as a bustling city. Those times were uncertain and often dark but people wanted change, their own land - and so Texas was claimed. The Brazos river enabled trading. The eclectic, muted colors in my weaving, the linear structure and the strong presence of the Brazos river are my interpretation of Washington on the Brazos at that time. 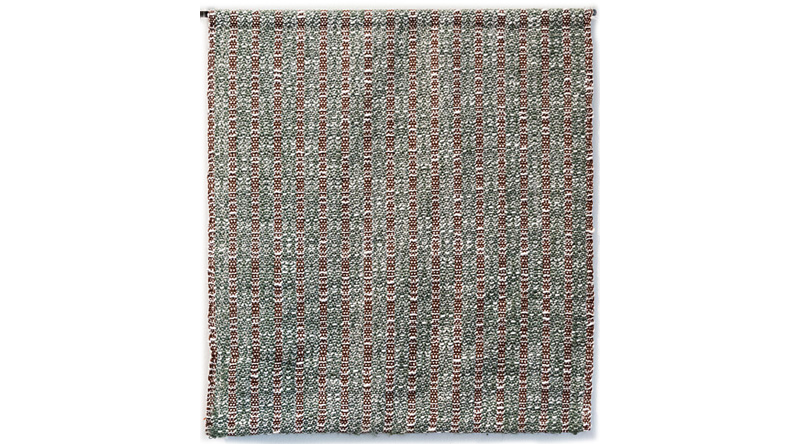 Home to the Cotton Gin and behind it, the railroad which made cotton farming a lucrative business for many years. I was very impressed to learn that cotton grown in the 19th century would be harvested from September until the first freeze. It would grow more like a bush instead of the small plants we see today. The weaving has the colors of a cotton plant and a traditional weaving pattern as we see in tea towels.

The railroad was a determining factor in the increased of commerce of cities. "My Railroad" is woven with heddles from an old loom which I rusted. I hung it off a big spool as it was used in commercial weaving. Textile production once flourished in this region.

In the 19th century, infrastructure was improved by the railroad, followed in the 20th century by highways. This is my woven contribution to the road system. Composed of plastic bags from dry cleaners, it is held up by a commercial weaving spool. 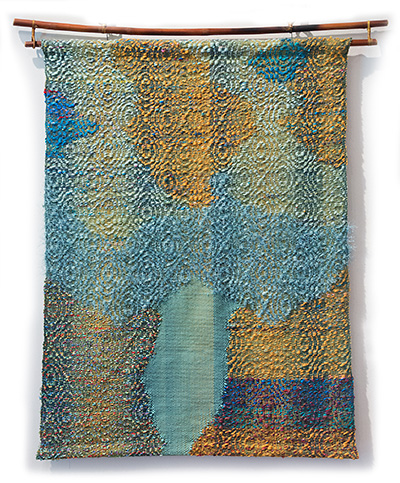 A fascinating place! I love the rolling hills, few houses and nature as far as the eye can see. By reading the history—birthplace of Baylor University, 4th largest city in Texas in 1860, declining population after refusing the railroad, and the severe damage by one tornado and 2 hurricanes—these natural disasters inspired my weaving. Depicted are the tornado at the bottom of the piece and the hurricanes, woven with the fuzzy yarn. Above it, we have the luscious landscape with rolling hills.

I was impressed when I visited, to learn about the transformation of this place to meet the challenging demands of its changing times. 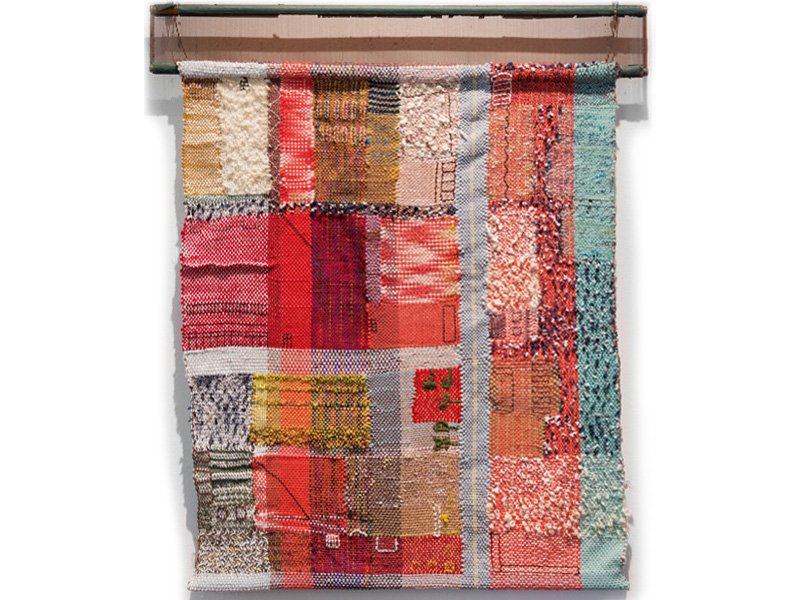 A bustling downtown area with its railroad. In my weaving the railroad is depicted by an old reed from the loom. It holds the weaving up, looking more like a quilt than a weaving. I like that about the downtown area. It still has old preserved buildings but is not afraid to mix them with new ones. This is were the past and the present face the future together.

Even though I wove the Texas flag many years ago - I have never shown it….maybe because it needed to be seen here first! The star is woven with feathers which reminds me how independent Texas still sees itself.

I would like to thank the City of Navasota for letting us reside in the Horlock House. What an honor to stay in this historic home! And thank you to the Brazos Arts Council who allowed me to be part of the Residency program. It is a privilege to be able to focus for 5 months only on art in this friendly city where people are so welcoming and helpful.