Statement for Checkpoint Carlos at the Butterfly Center

I am an artist - weaving with diverse modern, quotidian materials. At the most elemental level, weaving consists of warp and weft, each running in a separate direction, but intertwined. Inspiration for my artwork comes from current events as well as my environment. Creating something which seizes the moment and transforms it through medium and connection is what I strive to do.
In 2012, I started to collect newspaper bags for weaving. These sleeves come in an array of styles, from opaque to sheer, soft to strong colors, and often with the address of the paper printed in small black letters on the plastic. The bags symbolize what newspapers give us — a connection to global events as much as to local happenings in our community.
Word spread, and people (of whom I only personally know a few) collected and dropped their newspaper bags at my door. This sense of community is truly gratifying. Even though the people who will see the woven artwork will never meet the people who provided the materials, everyone involved becomes a part of something bigger than themselves. One part would not be possible without the other. In weaving with plastic bags, I use mostly traditional weaving patterns. They give an assurance of familiarity, balancing the texture and sometimes distorted structure created through the medium.
I lived in Texas with a green card from 1988 to 2012, at which time I became a U.S. citizen. I grew up in what was then West Germany. Its border with Eastern Germany was highly protected and most imposing when one had to travel through Eastern Germany to visit Berlin. The Berlin Wall completely cut off West Berlin from East Berlin and the surrounding Eastern Germany. The border wall, which divides the U.S. and Mexico, varies from a 15-foot-high corrugated steel and concrete fence to a chain-link fence with railroad ties. Presently, it covers around 685 of the 1,954 miles proposed. When the partial wall was built, memories of my home country's division surfaced, reminding me of the barrier which tore a formerly united country apart, and separating the people on either side who spoke the same language. 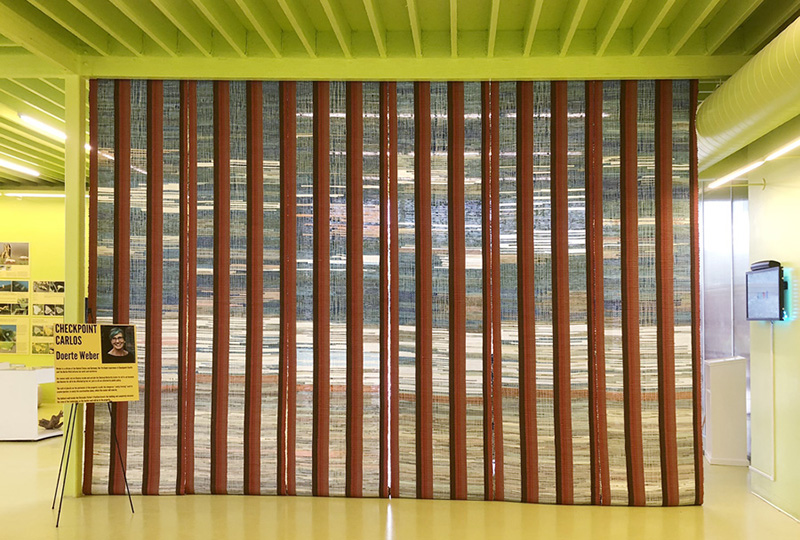 My installation, Checkpoint Carlos, which is inside the pavillon of the National Butterfly Center uses the dimensions of that steel fence. The warp is strong, double-threaded cotton yarn and represents the steel poles, while the weft consists entirely of plastic newspaper and dry-cleaning bags in colors which compliment the landscape and sky. Outside the pavillion, Checkpoint Carlos continues, with 150' of panels installed on the fence to remind us of separation. The panels are very vibrant with colors, designs and textures, similar to the interwoven cultures which coexist here, but are being separated. These panels will fade and disintegrate with the wind and hot Texas sun over time, and it is my hope that the border fence will likewise be disassembled; that politicians will communicate with each other to find solutions which benefit all of the people in the affected countries.
Each of my installations has opened my eyes to new possibilities, allowed me to weave communities together, and encourage people to interact with and touch my work. Enjoy!

Awakening News at the Border: Photos of Butterfly Habitat At-Risk of ...